Visit to the Senate guarantees investments for the Mário Penna Institute

Instituto Mário Penna is very proud of its partners and, as a Philanthropic Institution, it establishes fundamental cooperation with the Government to offer the best treatment to patients and achieve structural and technological improvements.
Yesterday in Brasília, the CEO of Instituto Mário Penna, Marco Antônio Viana Leite, received confirmation of investments via parliamentary amendments. The amount of R$4 million was confirmed in a visit to the President of the Congress, Senator Rodrigo Pacheco and by Senator Alexandre da Silveira.
In conversation with the parliamentarians, the manager presented the strategic recovery plan that has been executed since he took over the entity in 2019, overcoming major challenges and overcomes in this trajectory. The performance has been strongly based on the institutional strategic objectives in force, which are focused on assistance and economic-financial recovery, on the increase in production and hospital revenue, and on the renegotiation of outstanding debts – bank and with suppliers.
The senators showed recognition for the work Mário Penna, which completed 50 years in June 2021, being a true heritage of Minas Gerais and a reference in cancer care in the state. They were promptly sensitized to the demands presented for renovations and investment in new equipment. “Count on me and Senator Rodrigo Pacheco. The funding is being released to reinforce the service, especially for SUS users throughout the state who are served in Mário Penna”, said Senator Alexandre da Silveira, promising to return the visit soon, to closely monitor the application of resources. 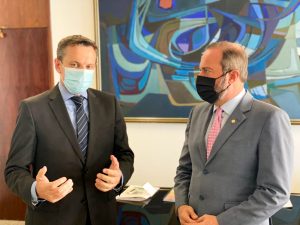 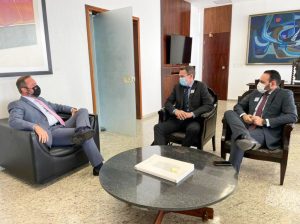